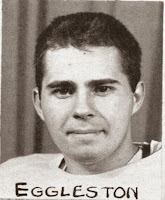 Robert C. “Bob” Eggleston, devoted husband and father, passed away unexpectedly at the Lahey Clinic Medical Center in Burlington, MA on Monday morning, May 4, 2009. The husband of Julia (O’Reilly), he was 69 years old; the cause of death was pulmonary fibrosis.

Bob was born, raised and educated in Springfield, IL. He was the son of the late Robert and Dorothy Eggleston. He attended Lawrence Grade School and Springfield High School, where he played football all four years and graduated in 1958.

Bob was a graduate of the University of Illinois. He had a successful career as a Software Engineer working primarily on military contracts. He founded P.E. Systems in the 1970’s, working on software development for the military. He sold the company and went on to work for RCA and Booze Allen Hamilton. He ended his career by working  again at P.E. Systems.

After a decade in Virginia, Bob and his wife settled in Burlington in 1981 where they became active members of the community. He was a member of the Burlington Historical Society, a Boy and Girl Scout Leader, a member of the Woburn Racquet Club and the Burlington Swim and Tennis Club. He was an avid tennis player who enjoyed photography, playing solitaire, and cooking. He made a great sauce and he was an avid Red Sox fan. He was also a faithful parishioner at St. Margaret’s Church.

A Memorial Mass was held at St. Margaret’s Church, 111 Winn St., Burlington on Friday, May 8 at 10 a.m. followed by an interment in Pine Haven Cemetery, Burlington. Memorials in Bob’s name may be made to Coalition for Pulmonary Fibrosis, Suite F, #227, 1659 Branham Lane, San Jose, CA 95118-5226; www.coalitionforpf.org. For family tributes to Bob, see this online obituary.
Posted by Will Howarth at 11:36 AM No comments: