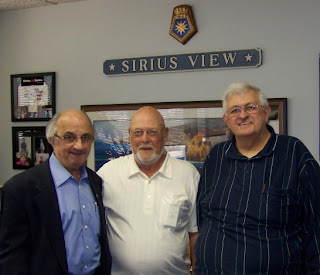 From 5th to 8th grade, I ran a paper route in Leland Grove, and on many a cold morning Champ Davis and I folded State Journals in the garage of another Butler classmate, Harvey Najim. Harvey was quick and funny; but while we read the comics, he scanned the financial news. We should have followed his lead.

Today Harvey is a wealthy Texan, the chairman and CEO of Sirius Computer Solutions, which sells IBM mid-range computers to corporations across the USA. The kid who grew up on Bates Avenue collects antique cars, owns a lake house, and flies to meetings in his private plane.

Lately, Harvey's life has shifted from business to service. "I want all kids to have the same opportunities as mine," he says. In 2006 he donated $75 million to create the Harvey E. Najim Family Foundation, which supports children's charities in San Antonio. Grants range from small to large; in just two years, the Foundation has disbursed over $21 million. BusinessWeek lists our classmate among the Fifty Top American Givers.

The Foundation's work centers on prevention of abuse or neglect, childhood diseases from cancer to autism to Down's syndrome, and educational opportunity. San Antonio has the highest school drop-out rate in the USA, a statistic Harvey wants to change.

Behind his generosity is the surprising news that he flunked out of college. After finishing SHS, he began in pre-med at Washington U, then moved on to Kansas U, but still couldn't settle down. Finally he turned to Wichita State, majored in math, and earned his degree in 1964.

With an ROTC commission, he served in the data-processing unit of Brook Army Medical Center, in Fort Sam Houston. After military life he worked for Boeing and then IBM in Atlanta, Dallas, and San Antonio. In 1980 he formed Star Data Systems, which in 1997 became Sirius Computer Solutions, named for the brightest star.

Harvey's father was born in Beirut, now the capitol of Lebanon. In 1918 he emigrated to Springfield and joined his brother to run the Lincoln Candy Company, distributors of candy and tobacco in central Illinois. Harvey's mother was from Wichita, home of a Lebanese community since the 1890s. Their marriage produced four boys, of which Harvey is the eldest. In his own family life, he raised two daughters and now enjoys three grandchildren.

Philanthropy energizes Harvey. He pins notes from children on his office wall, visits neighborhood centers, and gives pep talks to kids on the importance of education. The math is simple, he says: education brings earnings, which make for a better quality of life. His politics are practical and progressive. His thoughts on President Obama: "He's smart, articulate, and he knows it’s the right thing to help the less fortunate."

Sounds much like Harvey. The honors he has received to date: Lifetime Achievement from IBM and VARBusiness, Friend of San Antonio Youth, San Antonio Business Hall of Fame, and soon he may join a university board of trustees. If anyone from '58 deserves to be in our SHS Hall of Fame, it's Harvey Najim, and I hope that our Reunion Committee will nominate him.

Posted by Will Howarth at 12:04 PM No comments: