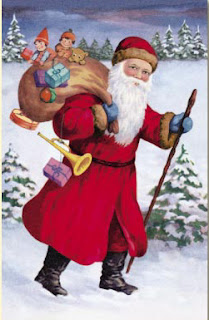 Once again, Harriett and Ram Sidoli have sent a greeting card that captures the spirit of the season perfectly.

Here's hoping that all of you have a safe, healthy, and happy holiday, and may the year 2007 be one of joy and fulfillment.

Thanks to everyone who provided pictures and stories throughout the year. Keep them coming!

Posted by Will Howarth at 3:58 PM No comments: 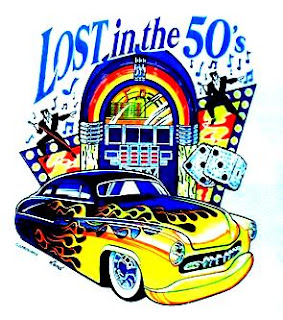 Tom Brosch sent me a link to a juke box site that plays 450 songs from 1956-60. You need to have Windows Media Player installed on either your Mac or PC to play the tunes. Here's another site that has tunes from 1950 to 1982, with no special software required.

Bet your grandkids have never seen a juke box. I remember the huge neon-lit ones, but also the small ones that played in booths. The design above comes from Teddy's Tees, in case you want to wear one to your next Sock Hop.
Posted by Will Howarth at 12:17 PM 1 comment:

I received this season's greeting from Lee Lochbaum, who has lived in Germany for the past six years. Lee taught English in the USA for three decades and is now happily retired. He has vivid memories of his Midwest days and enjoys reading from afar our '58 website and blog. 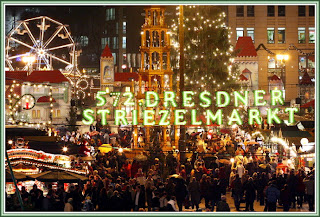 This past week in Dresden, the capital of Saxony, I attended the 572nd Striezelmarkt and enjoyed the traditional food, sights, and sounds of Germany´s premier Christmas Market. 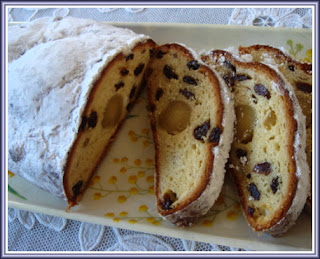 Of the 2,500 + Markets listed as "official" across the country, this one is the Striezel (old German for stollen) Market. Despite wars and devastating bombings, the bakers of Dresden baked the best stollen, now known the world over. The word stollen means the swaddling of Christ (hence the shape of the loaf). Its full name is Christstollen. 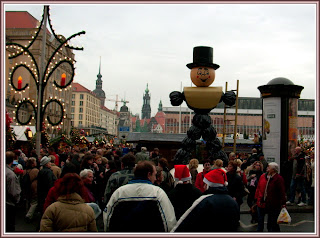 Another symbol of the season is the Pflaumentoffel, the Saxon word for chimney sweep. Pflaumen means plums and Toffel has an uncertain meaning. In many homes, these toy figures decorate baskets of fruit, including plums and prunes. 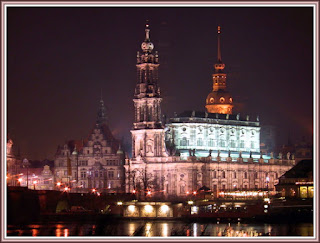 As well as its 572nd Market, this year Dresden celebrates its 800th anniversary as a registered city. I lived there for nearly three years and found Dresden to be a grand, Saxon-proud town that has always shown its determination to endure!

(I wish you a Merry Christmas and a good slide into the 2007 New Year from Dresden, Germany!)

Peace on earth! Lee Lochbaum, EXPAT
Posted by Will Howarth at 11:29 PM 5 comments: 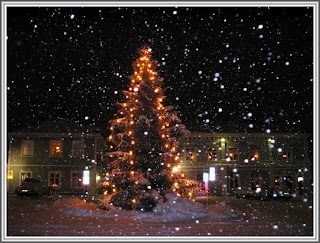 Here's some white Christmas, since not many of us will see one this year. Most days here in the East are mild and sunny, same in the Midwest, and only the Northwest is seeing true winter storms. If you don't recall what we are missing, see these amazing photos of snow crystals.

Here also is a hilarious cartoon rendition of "White Christmas," as sung by The Drifters in 1954, when it reached number 5 on the national charts. The Drifters owe their epic string of hits to Ahmet Ertegun, a long-time producer of rock and jazz who died yesterday.

Thanks to Barbara Edmiston Mitchell for the 'toon and tune.
Posted by Will Howarth at 3:39 PM No comments: 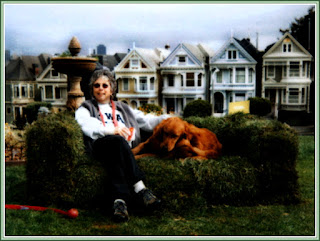 Here's a story with a happy ending. Six weeks ago, Jo Meiers Leggett lost her beloved golden retrierver, Chance, a loyal companion for thirteen years. She had a lonely time until word reached her of a young golden who needed a home.

"He had never been in a house, on a leash, to the park, on a walk, and only once to the vet to be neutered. Yes, I was out of my mind. Now, two plus months later, he's a normal two year old—mischievous, curious, liking a good chew, and checking out the ceiling (he'd never seen one before)."

Now she and Poco visit the park, dig the people and other dogs, and at home enjoy peace with Jo's veteran cat, Sally Tomato.

Jo sends greetings and wishes us "a stupendous holiday season and everything you want and need in the New Year."
Posted by Will Howarth at 6:34 PM No comments: 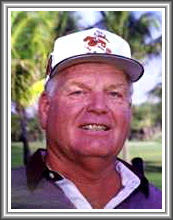 Sadly, Jim Rollman died yesterday, and he did not see the story about the Redbird baseball team. C. E. Welch was taking a copy to the hospital today, when he learned of Jimmy's passing. The following notice appears on the Kirlin & Egan website:

James was born on August 19, 1940 in Springfield, the son of Fred M. and Alva June Forster Rollman. He graduated from Springfield High School with the Class of 1958 and received his Bachelor’s Degree in Business from the University of Miami where he also served as Captain of the golf team.

James was employed as a salesman for Bell South Yellow pages in Ft. Lauderdale, FL. He was the co-owner and operator of Ascot Development in Coral Springs, FL and Pro Greens of the Midwest.

He was a very charismatic gentleman who greatly valued his family and friends. He was a passionate golfer, loyal to his Alma Mater, the University of Miami and an avid sports enthusiast.

He was preceded in death by his parents. He is survived by one son, James F. Rollman of Douglas, AZ; one daughter, Janet L. (husband, Chris) Hynes of Boca Raton, FL and one grandson, James B. Rollman.

Memorial contributions may be made to St. John's Hospice, 800 E. Carpenter Springfield, IL 62702. The family of James L. Rollman is being served by Kirlin-Egan and Butler Funeral Home, 900 S. 6th St.. Springfield.
Posted by Will Howarth at 10:24 PM No comments: 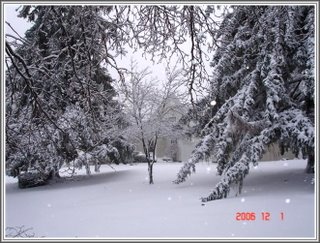 Winter arrived in Springfield last night with a vengeance. Lost power only momentarily but will have to have someone come and plow the drive so we can get out. Lost some large tree limbs due to the accumulation of ice on everything. But we could have been devastated if the winds had been worse. It's a beautiful sunny day here today.

Hope all is well with you and yours back east. Have a great holiday.

PS: Attached is a view of the house through the snow-covered trees and a deck that looks very lonely. 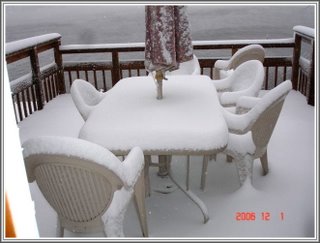 Thanks, Keith. It's 66 degrees in Princeton right now, but cloudy and humid. We're going to get high winds and LOTS of rain starting around 5:00 pm EST.
Posted by Will Howarth at 3:17 PM No comments: