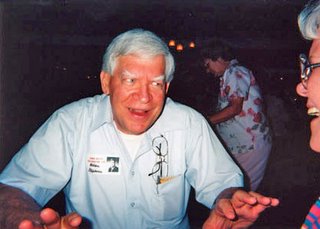 Libbie Peterson Miller writes that Allan Stephens had open heart surgery on January 11. He had a quintuple bypass that corrected a serious condition just in time. He is now at home and doing well, walking outside and enjoying life. Doubtless he would enjoy hearing from old friends. His e-mail and postal addresses are in the class directory.

This picture, taken at our 45th reunion by Judy Vicars Van Hagen, shows Allan sharing his wit and wisdom with none other than an appreciative Libbie Peterson Miller. They have been friends since childhood and are fellow alums of Butler Grade School in southwest Springfield.

Posted by Will Howarth at 4:26 PM No comments: 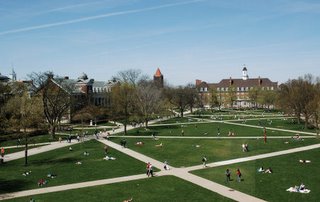 Did you attend the University of Illinois? I know that a fairly large number of SHS '58s did. In our day, only one U of I existed, the campus at Urbana-Champaign. Today the franchise has expanded considerably, to include Chicago and Springfield.

All fine places, but the U-C campus is big and also beautiful. In case you have forgotten, here's a handsome virtual tour of the place, to bring back some memories and also keep you informed on changes made. (Check out the "Hidden Treasures" page.)

No, I am not going to write about the Chief Illiniwek controversy. George Will just did that in the Washington Post. He is also a '58, from University High in Urbana. Small world.
Posted by Will Howarth at 12:25 AM 3 comments:

Janet Bailey Kerner sent me this clipping from the Journal-Register for Jan 10, 2006. (Click on it for a larger view.) Many thanks to Janet, and also to the class members who attended Chick's funeral in Springfield that day. 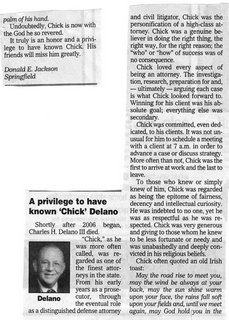 Posted by Will Howarth at 9:17 PM No comments:

Chick was born on March 19, 1940 in Springfield, the son of Charles H. and Nell Curren Delano. He married Barbara Schwarm on September 12, 1964 in Evanston, IL.

Chick was a 1961 graduate of Stanford University and received his law degree from the University of Illinois College of Law in 1964. He practiced law serving as a trial lawyer for forty-one years. He began his career with Continental Bank of Chicago and then practiced at two LaSalle Street litigation firms. He served as a Sangamon County Assistant State’s Attorney. In 1967 he founded Delano Law Offices. He served as the first corporation counsel for the city of Springfield, setting up its law department. In 1992 he purchased the Roland building which sat upon the foundation of the historic American House Hotel. The full historic renovation was recognized by the National Park Service as a certified historic structure. He was a member of Blessed Sacrament Catholic Church.

He was preceded in death by two infant daughters, Catherine Curren and Mary Christine.

The family of Charles “Chick” H. Delano III is being served by Kirlin-Egan and Butler Funeral Home, 900 S. 6th St. Springfield.
Posted by Will Howarth at 9:45 AM 4 comments: