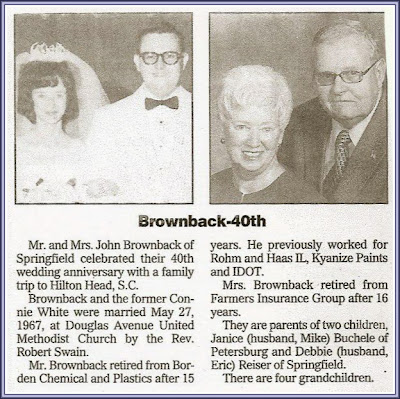 Congratulations to John and Connie Brownback on their Ruby anniversary.
And thanks to C. E. Welch for the scanned announcement.

Posted by Will Howarth at 8:01 AM No comments: 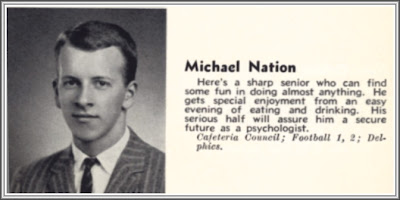 I don't know how many '58s have served in the armed forces. Maybe a hundred or more.

Doubtless, I have skipped many names—please, supply them in comments, and did any women in our class serve?

On this Memorial Day, the veteran I remember is Mike Nation. We were friends, and the only picture I have of him is the one above, from our yearbook. On our Memorial page, Mike is the second casualty. He died on Sunday, July 25, 1965. He was flying a Navy patrol plane and it crashed in the sea. He was 24 years old.

The yearbook is right: he was sharp, fun-loving, and in college he studied psychology. In the summer of 1960 we both worked on a state parking survey. Every morning, Mike arrived at my house to give me a ride. On the survey, he liked to ask people where they had been or were going. I said he would make a great shrink. He was dating Patty Lock, said he would marry her, and he did.

After that summer I lost track of Mike until 1965. His death made me ask why him and not me, or any of his other friends. All these years later, I still don't know, and the wars go on. Bill Golladay has a son flying in Iraq. I have a nephew on duty in Afghanistan. We all have connections to veterans, and to many who died in service. Today is a day to remember them.
Posted by Will Howarth at 12:08 AM 4 comments: 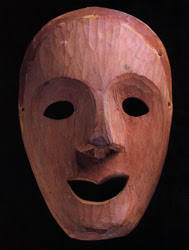 In our life journeys, we hope to acquire knowledge and in time also wisdom, that most elusive of virtues. It's hard to attain or define, but we all know some who had it and passed a little to us, along the way.

Want to know your Wisdom Scorecard? Then take this brief test featured in the New York Times. It's 39 statements for you to evaluate and takes only a few minutes. Whatever your score, the statements teach a lot about growing older and wiser. If you remember someone wise, let us know in a comment.
Posted by Will Howarth at 10:08 PM 1 comment: 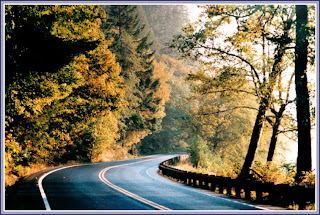 With gas approaching $4.00 a gallon, long road trips may be too costly, but it's still possible to take short drives here and there along the National Scenic Byways.

These are 126 less-traveled roads across America, designated by the federal government as having historic or scenic importance. The program protects and upgrades the highways, so you'll have a smooth ride, and the roads all have plenty of good places to eat or lodge.

To plan a trip in your home state or elsewhere, visit the America's Byways site and check out the slides, maps, and comments by fellow travelers. Then crank up some tunes, hit the road, and enjoy the ride.

Posted by Will Howarth at 8:30 PM No comments: 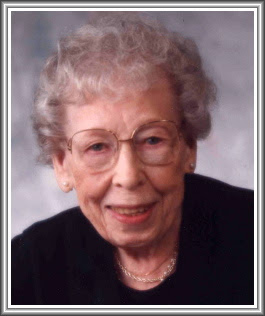 Roberta Dunnigan Grove, 97, died on Saturday, May 12, at her home in Springfield. She was the mother of our classmate, Joann Grove Dilts, who died in 2003.

Mrs. Grove was born in Virden and moved to Springfield in 1914. She graduated from SHS in 1927 and later from Brown's Business College. As a secretary, she worked for Lincoln Life and Northwestern Mutual Life. In 1939 she married H. Leroy Grove, who died in 1991.

She is survived by her son-in-law and our classmate, Stephen Dilts of Denver, two grandsons, and three great-grandchildren. Of her, Steve wrote "She led a quiet life that was a model of graciousness, humor, and family commitment."

Services are in Springfield on May 16 at St. John's Lutheran Church. Visitation begins at 9:30 am, with services at 10: 30 am and burial at Roselawn Memorial Park. An obituary notice and guest book appear at the SJR site.

Our condolences to Steve Dilts, who kindly supplied the portrait of Mrs. Grove.
Posted by Will Howarth at 2:45 PM 1 comment:

He is also survived by a daughter, four sons, eight grandchildren, two great-grandchildren, and one sister. He was preceded in death by his parents, a granddaughter, two sisters, and two brothers.

Mr. Hilligoss was an art teacher and guidance counselor at Springfield High School. Earlier in his career he coached football and golf. He served as camp director and caretaker of the Western Illinois 4-H Camp on Lake Jacksonville from 1960 to 1972. He served in the U.S. Army during World War II and was awarded the Bronze Star. He was an award-winning wildlife wood carver, enjoyed gardening, camping, and was an avid golfer and St. Louis Cardinals fan.

A funeral service was held at 11 a.m. Monday, April 30, 2007, at Williamson Funeral Home in Jacksonville, with burial in Asbury Cemetery. Memorials are suggested to the American Cancer Society. Condolences may be left online at the Guest Book on the obituary page of the Springfield Journal-Register.
Posted by Will Howarth at 2:21 PM No comments: 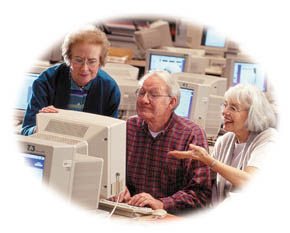 We 58s are plenty computer-literate, as evidenced by our directory of e-mail users, and the frequent notes we send pointing to jokes, cards, or Web sites. The new hot item of exchange: links to web videos, short films that run directly in a browser. 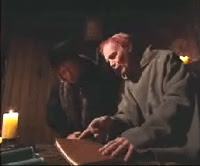 Janet Frederick sent one that tickled her, as a librarian: It's in Norwegian, with English subtitles, but its humor is universal.

Another video link came from Bill Ice, of a dazzling performance at the Edinburgh Tattoo by the Swiss Army Drum Corps.

And Ted Leach '60 sent one that smiles at "senior moments," the Remember Song by Tom Rush.

The main Web video sites are Google Video, YouTube, and LiveVideo. You'll find thousands of video clips on every topic, including this set on Springfield. If you have a favorite clip or site, please tell us in a comment. 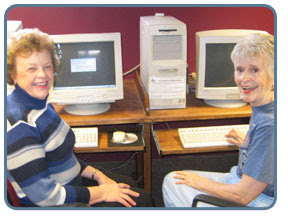