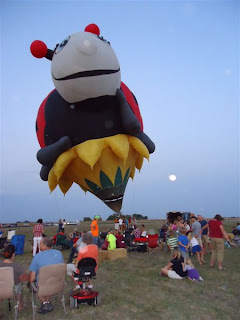 Here's a few photos of some of the many balloons at the Lincoln Balloon Festival.   The "ladybug" was sitting on a yellow flower.  This pilot came the farthest to participate--he was from New York. 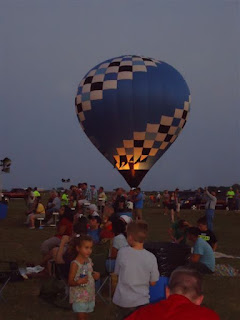 The blue balloon was tethered and giving rides to folks who wanted to go up for a few minutes. 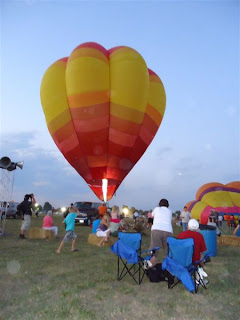 You can see several people helping with the yellow, orange, and red striped one.   They are always looking for volunteers and it's a fun thing to do. 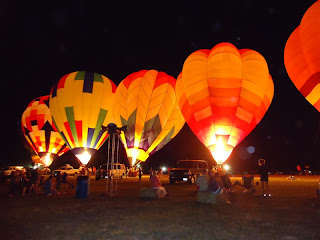 The group balloon photo was taken after dark when the "balloon glow" was held.   A commentator encourages everyone to do a countdown and all the pilots turn on the propane jets simultaneously.

It's good family fun.   Weather was perfect.  Hot and dry and just a little breeze.    The ones who had been there before brought folding chairs.   We lucked out and found an empty bale of hay to sit on.

Posted by Will Howarth at 1:18 PM No comments:

SHERMAN - Ron L. Dunkel, Sr., 72, of Sherman died at 1:52 pm, Thursday, August 16, 2012 at Memorial Medical Center, surrounded by his family and friends. He was born July 21, 1940 in Springfield, Illinois to Richard and Maxine Shaffer Dunkel. He married Sandy Eells on December 31, 1993 and she survives him. His parents preceded him in death.

Ron was a U. S. Air Force Veteran serving from 1957-1962. He was a member of the 170th Fighter Squadron of the Illinois Air National Guard and was deployed in 1961 during the Berlin Crisis. He was a member of Koke Mill Christian Church. He loved cooking and won several Chili Cook-offs and was known for his BBQ Ribs. He enjoyed spending time in his pool, Sunday family dinners and researching Springfield History.

Published in The State Journal-Register on August 18, 2012
Posted by Will Howarth at 10:33 PM No comments: