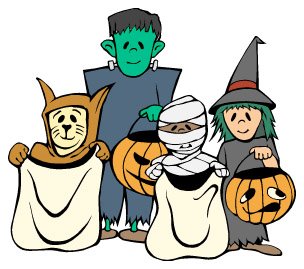 Tonight, will you put on a porch light and wait for goblins and ghosts to show at the door? Do you have a supply of bad goodies for their teeth? Will you ooh and aah at their costumes, direct from Wal-Mart?

I have good memories of Halloween. We went out in small groups, cruising the streets and scooping up bags of sweet loot. Nobody ever pulled any vandalism, other than soap on windows and TP in the trees. Later we got too old for that stuff and began to hold costume parties and dances.

Today's kids face many Halloween hazards, according to this bulletin from the Illinois Department of Health. Traffic, mean dogs, and sickos who hand out tainted candy; it's enough to make a kid stay at home!

Hope you have an enjoyable evening. And . . . BOO! 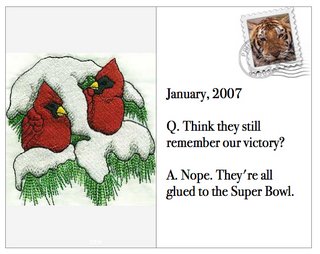 Posted by Will Howarth at 3:23 PM No comments:

The Caddie Woodlawn picture stirred Barbara Edmiston Mitchell to go rummaging in her scrap albums, and up came two more shots of the Hay-Edwards 8th grade play. (Click on the pictures to enlarge.) 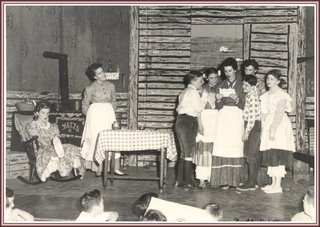 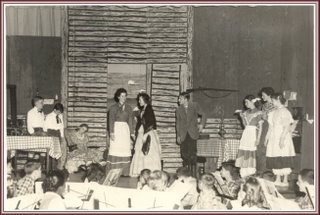 Several members of the school orchestra are watching avidly. Only allowed in a dress rehearsal? Thanks to Barbara for the pictures and names.
Posted by Will Howarth at 9:21 PM 4 comments:

That recent photo from Warren Haake shook loose another Hay-Edwards memory, this time from Janet Bailey Kerner. Above you see the cast of "Caddie Woodlawn," the 8th grade play for Hay-Edwards in early 1954: from left to right, Beverly Blue, Sue Jacobs, Dana Furry, Ruth Lance, Janet Bailey, and Suzanne Lee. (click on the picture to enlarge it)

Ruth played Caddie and Janet was Minnie, Caddie's younger sister. The play was adapted from a 1935 novel by Caroline Woodhouse, depicting the girlhood of her grandmother, Carol Ryrie Brink. The Brinks moved from Boston to Dunn County, Wisconsin, in 1857. Their farmhouse is still open to the public, spring through fall, at Caddie Woodlawn Historical Park.

According to Janet, this picture is moments after Ruth was dancing and lost her light blonde wig. "Miss Mullett was furious, so she took Ruth to the back of the stage and actually 'glued' the wiglet back on to Ruth's hair."

Janet recalls that everyone helped to paint the set, and in that process her head got doused by a bucket of red paint. Mr. Morris, the principal, became agitated and raved about the kids "pulling antics and not getting the job done."

Janet ran home to her mother, who first thought her child had a serious head wound! She cleaned her up and sent her back to school. Janet still can't remember who spilled that paint, but suspects it may have been Bob DeFrates or Robert Wright. (Fess up, guys.)
Posted by Will Howarth at 2:36 PM 3 comments:

I recently heard from Ann Hamilton, who is PTO Teacher Liaison for SHS. She writes that the school budget is severely constrained these days, and that often teachers cannot provide students with "classroom needs" to enhance the learning experience.

These include books, projectors, or transparencies for copiers. Some classes lack maps, dictionaries, and even pencils. Bigger-ticket items, like notebook computers or electronic whiteboards, are also needed urgently

Ann asked if the Class of '58 might wish to contribute. I checked with our Reunion Committee, who gave its approval to this announcement.

If you want to learn more, I've posted three files that you may download. One is an overview of the problem, and the others list needs for English, Languages, and Art. (Files are in MS Word: let me know if you need another format)