CE graduated from Springfield High School and served on its Class of 1958 Reunion Committee for 52 years. He earned his Bachelor's of Science in Education from SIU Carbondale and his Master's from the U of I Springfield. He served in the U.S. Army during Vietnam from 1966-1967. He formerly taught at Grant Middle School and retired from Southeast High School in 1998.
CE was a member of Phi Delta Tau Fraternity and very active in Springfield and IL Education Assoc. He was also past president of the IL High School and College Driver Ed Assoc., the American Driver & Traffic Safety Ed Assoc. and Phi Delta Kappa. CE was a member and Sunday School teacher at Central Baptist Church. He enjoyed fishing, golfing and traveling.
He was preceded in death by his parents and is survived by his wife, Joleen of Springfield; son, Chad Allyn Welch of San Diego; daughter, Kitty Joy and her husband, Frank Springhart of San Antonio, TX; aunt, Helen Welch and many cousins.
Family will receive friends from 3:30-7:00 p.m. on Monday, December 27, 2010 at Central Baptist Church, 504 S. 4th St., Springfield. Following visitation, cremation will be accorded by Butler Cremation Tribute Center.
A funeral ceremony will be held at 10:30 a.m. on Tuesday, December 28, 2010 at Central Baptist Church with Rev. Reg Mills officiating. Burial will follow at Camp Butler National Cemetery with military honors.
Memorial contributions may be made to: Central Baptist Church, 504 S. 4th St., Springfield, IL 62703 or American Diabetes Association, 2580 Federal Dr., Ste. 403, Decatur, IL 62526.
The family of CE Welch, Jr. is being served by Kirlin-Egan & Butler Funeral Home, 900 S. 6th St., Springfield.

Posted by Will Howarth at 12:20 AM No comments: 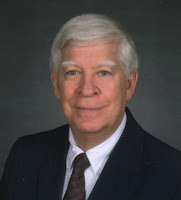 Major Allan Durand Stephens, 70, husband of Rev. Mary Lou Stephens, died Tuesday, December 14, 2010, at the Hospice Compassionate Care Center of Richmond.
He was born on June 2, 1940, in Springfield, Illinois, to Charles Bennett Stephens and Cordelia Jane Crout Stephens, both of whom preceded him in death. He attended and received his BS degree from Southern Illinois University, and later received his teaching certificate from the University of Texas at Austin. Allan completed his Masters degree at Southwest Texas University at San Marcus. He proudly served his country in the U. S. Air Force during the Vietnam conflict.
He served as band director at Model Laboratory School, in Richmond, for 24 years. Music and Ham Radio were his life. He was a member of the Central Kentucky Concert Band, the Richmond Area Community Band and the Rose Barn Theatre. He belonged to the Ham Radio Club and his call sign was N5AIT. Allan was a member of the First United Methodist Church, where he proudly took part in the music program by playing hand-bells and singing in the choir.
In addition to his loving wife, Mary Lou, of Richmond, he is survived by one daughter, Susan Zarzycki (Scott) of North Hollywood, California; one granddaughter, Natalie Zarzycki; one brother, C. Bennett Stephens, Jr.; one sister, Dee Dee Gain of Springfield, IL; two step-brothers, Russ Fues of Memphis, TN and Don Fues of Columbia, MO; one sister-in-law, Barb Stephens-Rich of Sandusky, OH; and numerous nieces and nephews. He also leaves an “extended family” of students and MADD (Music Art Drama Dance) Camp Campers.
Memorial Services will be held later. Friends may sign the Guest Book at the Oldham, Roberts, & Powell Funeral home web site.
Posted by Will Howarth at 11:20 AM No comments:

Judy Sink Stephens Scott
sent this photo of the 1957 a cappella choir.
Can you still identify the names and faces?
(Click on it to enlarge.)
Posted by Will Howarth at 10:48 PM No comments: