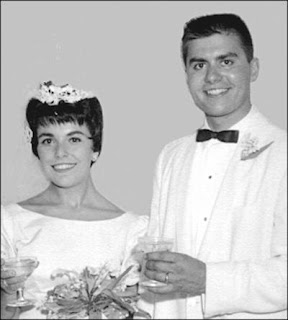 Another milestone: Jan Giuffre and Roger Sables celebrated their 45th wedding anniversary recently with a party at Island Bay Yacht Club. They married on June 23, 1962 in Blessed Sacrament Church.

They have three children and seven grandchildren, all living in Springfield. Roger is the owner of Giuffre Buick and Jan is a broker associate with Re/Max. Congratulations to the couple, and thanks to Libbie Peterson Britton for locating the story and picture, now appearing in the SJR. 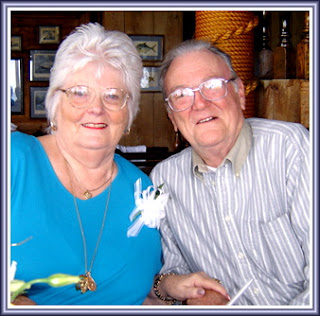 Dee Dee and Bill Benedict have reached a life milestone earlier than anyone else in our class: the 50th wedding anniversary. They married on April 21, 1957 when she was 17 and he was 20. After a three-day honeymoon, she returned to her Junior year in high school and he went back to the Navy.

Dee Dee says some folks said the marriage wouldn't last, but today they have three children (Michael, Kathy, and Amanda) and five grandchildren. They've lived in Pompano Beach, Florida for 42 years and both are now retired. Congratulations to Dee Dee and Bill on such a long and happy union.
Posted by Will Howarth at 8:26 AM 2 comments: 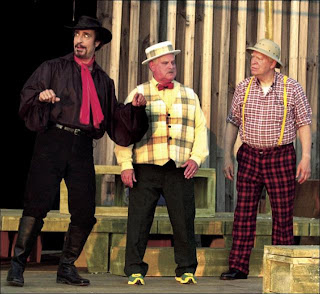 From left, Rusty Rechenbach as El Gallo, Dave Eaken as Bellomy, and Allan Stephens as Hucklebee rehearse a scene of the Rose Barn Theatre's production of “The Fantasticks.” Photo by Bill Robinson / The Register

In our Sophomore year, Allan Stephens starred in “The Skin of our Teeth,” playing George Antrobus in Thornton Wilder’s madcap survey of history repeating. Charles Boughton directed. Now 51 years later, Allan will appear as Mr. Hucklebee in “The Fantasticks,” a musical with elements drawn from Shakespeare and Rostand. It played off-Broadway for 42 years and brought fame to the likes of Jerry Orbach and F. Murray Abraham.

Allan first appeared in "The Fantasticks" in Austin, Texas about 35 years ago, for 40 performances. The current show plays at the Rose Barn Theatre in Richmond, KY on July 12-13 and July 21-22. A full story appears in The Register of Richmond, KY. Of this gig, our favorite thespian in Kentucky says “ It’s the best coverage I have had since Bill Tranquilli and I buried the skull.” (Do you remember that story? Let us know in a comment.)
Posted by Will Howarth at 6:32 PM 8 comments: 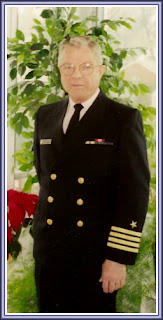 On this Independence Day, another military career to honor is that of Captain Harry Hyndman, who served in the United States Navy and Reserve for 27 years, 1962-89.

Harry was Chief Engineer aboard the USS Warbler, a coastal minesweeper. His other duties included damage control, repair and salvage, movies, morale, and recreation, which meant coaching the ship's football team, with little prior experience.

His home port was Sasebo, Japan, and he spent much duty time patrolling the shores of South Korea, Taiwan, the Philippines, and Vietnam, where he was on duty during the Gulf of Tonkin incident, the start of the shooting war.

In his later years Harry assisted with intelligence operations in the central Pacific, at Guam and the Micronesians, for support of air patrols and nuclear submarines. For a man trained as a research scientist, he had many assignments that roamed far from the laboratory.

Before retirement, Harry served as professor of Naval Science, and commander of the NROTC unit, at the University of Missouri in Columbia. As a reserve officer, he had a long career with the Monsanto Company and in recent years served the Berean Mission in the USA, Latin America, and Asia.

Harry and his wife, Kathleen, raised three children and have six grandchildren. They live today in Olivette, Missouri, and have attended most of our Reunions, after decades of service abroad. 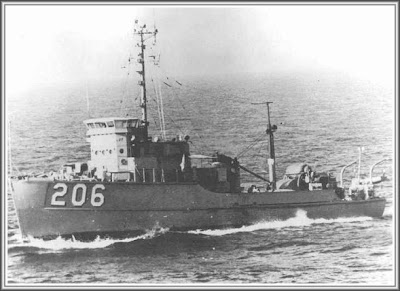 We have just learned the sad news that Joe Magro died two years ago in Alton, Illinois. He was nearly 65 and had been retired for 10 years. With the help of Libbie Peterson Britton, Judy Van Hagen and CE Welch, we located the following obituary text from the St. Louis Post Dispatch:

Joseph Magro, a retired teacher in Alton, died June 30, 2005, of cancer at Alton Memorial Hospital in Alton. He was 64 and lived in Godfrey.

Mr. Magro was born in Springfield, Ill., and graduated from Springfield High School in 1958. He received a bachelor's degree in biology and a master's in education, both from Southern Illinois University Carbondale.

Mr. Magro was an educator for more than 25 years at JB Johnson Career Development Center in Alton. He served in many capacities at the center, such as librarian and head of the television studio. Mr. Magro was also a longtime sponsor of the school's drama club. He retired in the mid-1990s.

While at the center, Mr. Magro taught night art classes at Lewis and Clark Community College in Godfrey for about 12 years.

Mr. Magro is survived by a sister, Joanne J. Rockwood of Gainesville, Fla.

A memorial service was held at the Rose Garden Restaurant and Banquet Center in Alton.