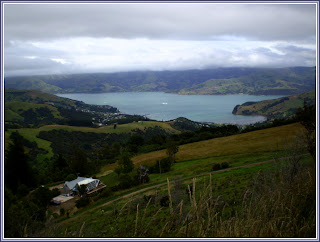 Akaroa Bay
I'm back from a 14-day trip to New Zealand, a place I dreamed of visiting for years. Something about its far-off location, and its mix of British and Pacific culture, has always attracted me. The above scene is near a small town on South Island, where I'd be glad to return and stay a while. (click to enlarge)

I went as the "study leader" of 35 Princeton alums on a cruise along the North and South islands, from Auckland to Queenstown. My duties included four lectures and nightly discussions on readings or films. The rest of the time I played tourist.

Our boat was the Odyssey Clipper, a small cruise ship for 100 passengers. The British and Asian crew gave exceptional service and kept us calm as we sailed the Roaring Forties, with seas one night reaching four-foot swells.

January is the austral summer, when the days are mixed sun and rain, with brisk winds. The trees and flowers are in full bloom and the dominant color is green, mixed with blue waters and gray to pearl skies.

It's a young country, inhabited for 800 years by the Maori people, who came in war canoes from Tahiti and the other Cook Islands. Scottish, English, and Irish settlers arrived in the 1830s, first as whalers and then as shepherds and farmers.

Cities are small but lively, costs are low, the air is clean, the water fresh, and the people friendly. They all speak English, too! One slogan for the country is "New Zealand: like 40 years ago." Not bad at all!

You may see more pictures at my site and one at Princeton that has films of our adventures: sheep dog herding, swimming with dolphins, riding in jet boats, and bungee-jumping into a river gorge. That jumper is a brave engineer, from the Class of '63. 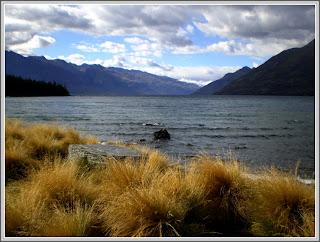 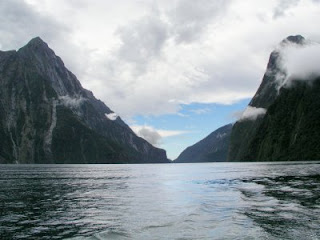 For the next two weeks, I may not be able to update the blog. I'm leading a group from Princeton on a journey to New Zealand. An outline of the trip is here, if you're interested.

Meanwhile, please send me pictures and news, and I'll do a big update on my return. 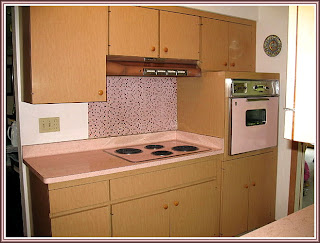 In case you're not feeling old enough, check out this story: a Boomer-generation couple has donated a 1958 PINK kitchen to the Wisconsin Historical Society.

Not harvest gold, not avocado green, but pink. It matched those pink shirts and poodle skirts that very cool kids used to wear.

Anyway, Happy New Year. I'm going up to the attic to see if I can find my flat-top wax.
Posted by Will Howarth at 10:47 AM 1 comment: