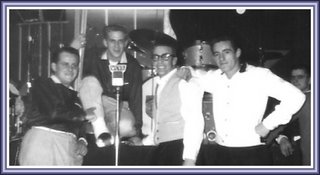 1958: Gordon leaves for college. Bill Waldmire replaces him on drums and Tom Blasko joins on accordion and later key boards. More appearances, one with teen idol Fabian, lead to audition tapes and a contract with Bobbin Records, an R&B label from St. Louis.

1959: on their early records, Ben writes the A sides and Charlie the B sides. The first Bobbin release is (A) "Baby Tonight" and (B) "You Don't Care." The band then plays on "Shower of Stars," a series of live performances with recording artists like Johnny and the Hurricanes, Jerry Lee Lewis, Frankie Avalon, and Annette Funicello.

1960: the second Bobbin release is (A) "Don't Be Cold" and (B) "Saturday Night Bop." They make many personal appearances on Hop shows (similar to American Bandstand) in Illinois and Missouri, as offers to buy their contract arrive from record companies.

1961: the band adds a sax player, Jerry Black. Bill Waldmire departs to raise a family and Gary Turley joins on drums. Their early theme song, "Raunchy," is a Bill Justis tune adapted from "Backwoods," a Southern blues riff. [To be continued] 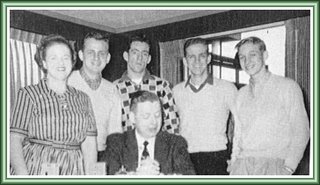 (click links to hear the songs)
Posted by Will Howarth at 3:15 PM