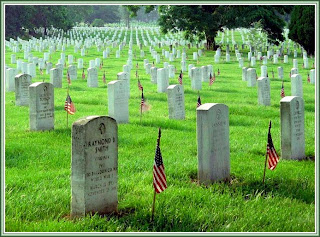 Memorial Day comes at high spring and for many Americans is the beginning of summer. It's also a day for us to remember our family members, neighbors, and friends who served in the armed forces, whether in war or peacetime, in the defense of our nation and our freedoms. I asked Bob Shewmaker about our classmates who had served, and here are his thoughts:

"Yes, it would be interesting to have a list of '58s who served in the armed forces, since we were in the Cold War era and the runup into Southeast Asia, trying to learn how to conduct a different type of warfare--which we still don't know how to execute.

"I remember after being commissioned and in grad school in October of '62, when the Cuban Missile Crisis came along, we all thought that we would be lucky to finish the semester. Those in the military formed strong bonds, since we spent a lot of time together, often in isolated circumstances, and we had some life changing, once in-a-lifetime experiences together. I still keep up with some of the close friends from those days and remember the ones who gave their lives.

"Last March, I was on the way to Williamsburg and exited off I-95 to stop at Quantico Marine Cemetery to visit the grave of Bob Willis. Now his site is surrounded by more of his Marine comrades."

In coming days, I will feature stories about classmates who had military careers, starting with Bob Shewmaker. Please send your thoughts and stories to me, or make a comment.

Update: today an Illinois National Guard unit returned after a year in Iraq. Check out the video. Thanks to Judi Dunkel Headrick for the link.

Posted by Will Howarth at 6:30 PM No comments: 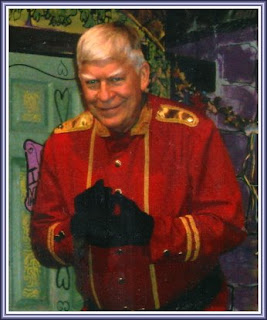 Above: Allan Stephens appearing as Chief Magistrate of the village of Kolyenchikov, in Neil Simon's "Fools," which played at the Rose Barn Theatre in Richmond, KY, last month for six performances. In the play, Alan's character presides over a town where people are idiots and incapable of love. The magistrate is not exempt from these flaws, but he does his best.

Allan has not yet signed up for Reunions, nor have I, but we will soon. Many folks have signed up, and here (to goad us into action) is the list, as of 5/24/08:
Please dig out your packet, fill in the reservation forms, and send it to Keith or Judy today.

And please remember pictures for the forms and the dvd! (See entries below).
Posted by Will Howarth at 8:53 PM No comments: 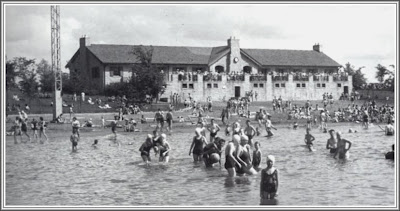 In recent years, Springfield has survived tornadoes, blizzards, and an earthquake. But news today has rocked the town: the beach at Lake Springfield has closed. We don't know for how long, because the decision arose from a budget fight between the city and the CWLP, according to this story in the SJR.

Lake Springfield was a WPA project in 1931-35. Workers cleared land, built a dam, and dug a great reservoir to impound Sugar and Lick creeks. With construction of purification and hydroelectric plants, the lake became a source of Springfield's water, light, and power, plus the recreational pastimes of fishing, boating, and swimming.

Doubtless we all have our memories of visiting the lake for a swim on hot summer days. When we meet on Friday, Sep 5 at the Motor Boat Club, it will be sad to think that a grand old beach is no more. Got any comments or memories? Please share.
Posted by Will Howarth at 1:52 PM 2 comments: 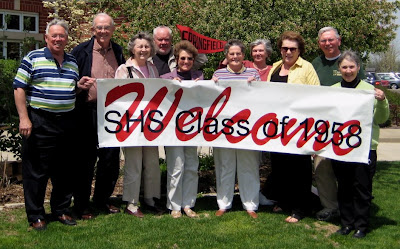 (Click to enlarge)
Hello '58s,
Here we are at Panther Creek: wind-blown and smiling after another fun, productive meeting. Please send us soon your information sheet, current picture for the information sheet, and reservation sheet. Classmates are really enthusiastic about the Reunion weekend and we are getting their replies every day.

Judy
Posted by Will Howarth at 10:03 AM No comments: