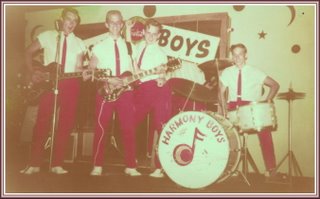 The date is June 14, 1958, the place is Teenland out near the Fair grounds, and here are The Harmony Boys: (left to right) Ray Dippel on lead guitar, Benny Harmony, Charlie Harmony, and Gordon Jones on drums.

In 1956-62, The Harmony Boys lived an American dream by going from obscurity to teen fame, with girl fans screaming in a frenzy and mobbing the band offstage. Into the crowds vanished many a shoelace, along with combs, guitar picks, and drum sticks.

The first rock and roll band in Springfield, for a decade they had record contracts, appearances with rock stars, and songs on the top 40 charts. Thanks to our '58 classmates, Charlie and Gordon, I've assembled in 5 parts this brief history of those golden years.

1955: the brothers appear on Uncle Tom's Barn Dance, a show telecast live on Mondays from Decatur. The producer adds a Saturday show featuring rock-and-roll music, and the brothers play as a rock act, backed by local musicians. [to be continued] 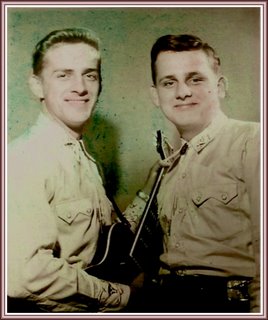 Pictures from Gordon Jones & Charlie Harmony
Click on them to enlarge

AKA... THE Harmony Brothers...

Especially when we knew you.

Charlie was such a sweetheart as I recall. We were in Mrs. Lawrence's infamousART class together and though he was her teachers aide and a famous ROCK and ROLL STAR...
A humble chap that never bragged on his Fame nor did
I realize it til Wil started this blog of all those gigs and TV appearnces + records. Charlie gave me the BOBBIN record Postcard to remember him by when he graduated from Good Old SHS
I just tucked it away in my sentimental lifes journey albumn... My grandchildren get a big charge out of looking at my collection of Elvis, James Dean, and of course those FAMOUS Harmony brothers photos from way back when.
I wonder how much the Postcard would sell for on E-Bay TODAY. It's priceless to me...and not for sale at any price! ! !

Hugs to all the boys in the band.
Would love to see them back on stage and play at our 50th...

It's so nice to read your fond memories and kind words about my great-uncle. He is still a sweetheart! If you have any pictures you'd like to share that aren't already posted here, I would be willing to pay for copies. I found out yesterday that my mom's old scrapbooks and pictures were ruined when she lent them to her younger sister several years ago and her basement flooded. What a shame!