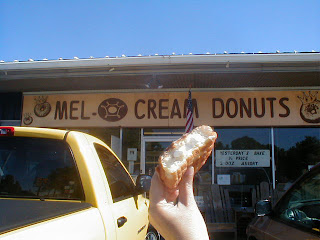 Springfield is the birthplace of many foods: horseshoe sandwich, Cozy Dog, Maid-Rite, Ray's Chilli, and Mel-O-Cream doughnuts. For a complete history of this delicacy, and a tour of the modern plant, visit the company's home page.

One item left off its News page: according to today's SJR, the M-O-C shop at 217 East Laurel can't get a full health code clearance. It's had 18 inspections in the last 6 months. Little matters like poo left by rats, cockroaches, ants, flies, and mice. I'll pass on the chocolate-dippers. 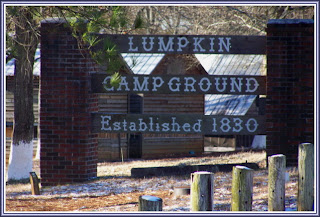 Jack Downs sent pictures from his trip to Georgia
for brother Tom's funeral, Jan 18-19.
Above is Lumpkin Campground,
Tom's pet project and favorite place to visit. 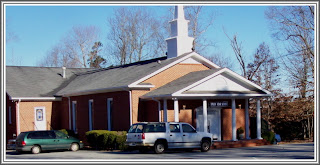 Tom's church, to which he devoted many years of service. 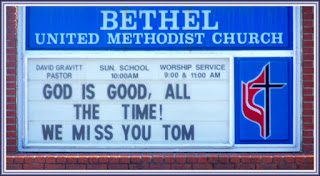 A church tribute, on the day of services. 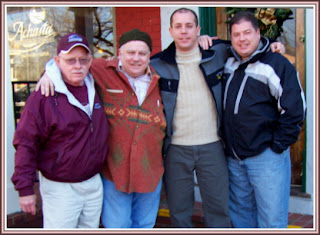 Pictures by Jack Downs
Posted by Will Howarth at 11:52 AM No comments: 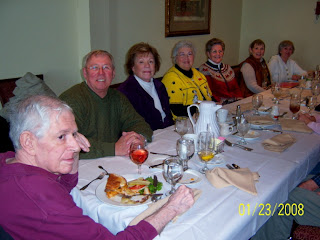 As we draw closer to a 50th Reunion in September, the Reunion committee meets more often to plan events and check pulses. So far, everyone seems fit and willing to face the rigors of a 3-day invasion from all of us outcasts who left Springfield long ago.

New faces at the table include Stan Thomas, who spent the last few years in Las Vegas and St. Louis, now returned with Mary to live near their daughter and 19-month old grandson. Also appearing is John Dunn, who has recovered nicely from lung surgery six months ago. 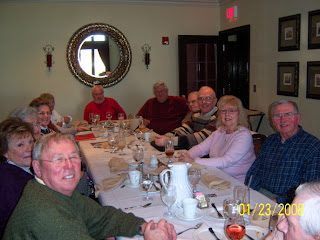 In early March, they will send a reservation letter for the Reunion, held over the weekend of Sep 5-8, 2008. Please make space in your calendars to come back home again to see old and new friends. 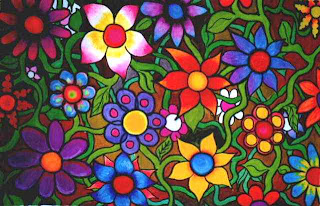 After that sad message, it's time for more cheering news. Elizabeth Tinsley Alexander sent me a link for a website called Take Me Back to the Sixties. It's got music, images, and lots of nostalgia. Tom Downs often sent me links of this sort; so it's a little tribute to him, too. O Happy Days.
Posted by Will Howarth at 1:04 PM No comments: 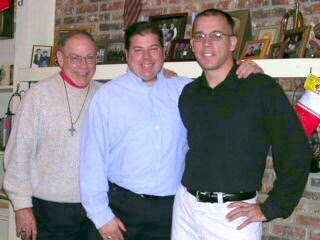 Tom Downs died suddenly on Thursday, January 10, 2008, in Washington, DC. He had gone there to see his son, Tommy, receive promotion to the rank of Master Sergeant (E-8) in the United States Army. They went out for dinner afterwards and Tom had a massive heart attack.

Tom was widely known in the Class of '58 and will be sorely missed. He had a natural smile, a friendly manner, and he stayed in touch with friends over the years by e-mail, calls, and visits. He attended several Reunions and was looking forward to our 50th next September.

Tom attended Springfield Junior College and the University of Illinois at Champaign-Urbana. He worked as an industrial engineer for Sangamo Electric, Magnavox, Abbott Laboratories, and NCR in Ithaca, NY. He married twice and had three sons: Todd Lee, Scott Allyn, Thomas Marsh, and one grandchild.

In 1979 Tom settled in Dawsonville, GA, where he worked for Scientific Atlanta, and later DCA, as Manager of Requirements Planning. He designed and built a rustic home in the Georgia mountains. He became active with church and community work and sang in several choirs.

After retiring in the early 1990s, he joined Home Depot and worked there up to the time of his death. A devoted alum of Harvard Park School, he contributed much to its memory page, and he was especially fond of his 4th grade teacher, Anne Laura Webster.

Funeral arrangements are as follows: Bearden Funeral Home: visitation Fri, Jan 18 from 6-9 and funeral Sat, Jan 19 at 2:00 at Bethel United Methodist Church, both in Dawsonville. An obituary appears in the SJR for Wed, Jan 16, linked to a Guest Book for friends to sign.
Posted by Will Howarth at 9:01 PM 5 comments: 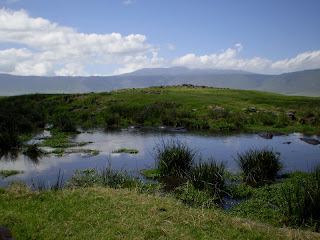 This place is Ngorongoro Crater, in northern Tanzania. The crater has a high encircling ridge, forming a natural corral for wildlife. In this pool you see hippo, and nearby are zebra, impala, wildebeest, hyena, and lion.

Over the holidays I spent two weeks in Tanzania, serving as study guide for 25 Princeton alums and their families. We landed near Kilimanjaro, then journeyed in safari wagons to overnight stays at lodges and tented camps.

By day we hunted with cameras, and in the evenings we had fireside discussions. On Christmas Eve, two Santas showed up with gifts for the youngsters. On New Year's Eve, the camp staff danced and serenaded one of our birthday Dads, who danced right back.

The trip home took 40 hours, a journey from 94 degrees to 0. As always, I'm glad to be home, but the good memories will linger. I have posted some pictures of the trip that you may enjoy.
Posted by Will Howarth at 6:40 PM 2 comments: