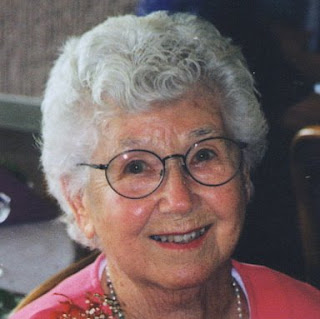 Mary Watson Howarth, 94, formerly of Springfield, died Saturday, May 30 in Nashville, Tennessee. The wife of former Mayor Nelson Howarth, she served as first lady of Springfield for twelve years (1955-59, 1963-71), when the city made great advances in race relations, urban renewal, and modern planning. In addition to being a full-time mother, Mrs. Howarth was an officer of several community organizations in Springfield, a skilled social hostess, and a tireless political campaigner.
Born Mary Watson Prindiville on September 8, 1914, she was descended from Irish families who emigrated to Chicago in the 1840s and remained a proud fourth-generation Chicagoan to the end of her life.  She graduated from Wheaton High School and attended the University of Illinois in Champaign-Urbana, and business school in Chicago. After working in law and insurance offices, she married Nelson Howarth on March 2, 1935, in Chicago.


The Howarths moved permanently to Springfield in 1941, where Mrs. Howarth raised a family of five children, including three under the age of seven, during the years her husband served as a naval officer in the Pacific in World War II.  After the war, two more children were born in Springfield, and beginning in 1950, Mrs. Howarth assisted her husband over the course of a 25-year political career and six mayoral campaigns.
When the Howarths retired from politics in 1975, Mrs. Howarth went back to work as a legal secretary in her husband’s law office until his retirement in 1989. Throughout their fifty-six year marriage, and in the 18 years since his death, she remained her family's foundation and inspiration.
In 2002 she moved to Nashville, where her vibrant spirit, sharp wit, practical wisdom, and personal strength drew to her many new friends.  The Howarth family wishes to acknowledge the extraordinary caretakers and staff of The Health Center at Richland Place for their loving care of Mrs. Howarth in her final years and Alive Hospice for their kind assistance at her death.
She was preceded in death by her parents, William Aloysius Prindiville and Gertrude Mary Shepherd, and by two sisters, Ruth Prindiville Ahern and Susan Prindiville Bichl. She is survived by her five children, Susan Howarth Eastman of Alton; William Louis Howarth of Princeton, NJ; David Nelson Howarth of Cortez, CO; Lydia Howarth of Nashville, TN; and Jo Howarth Noonan of Atlanta, GA; also by thirteen grandchildren and four great-grandchildren.
A memorial service will be held in Nashville in mid-June. Burial and a family service will be in August at Homewood Memorial Gardens, Homewood, IL. In lieu of flowers, donations may be sent to the Mary and Nelson Howarth Scholarship at the University of Illinois in Springfield.
Posted by Will Howarth at 2:58 PM 8 comments: 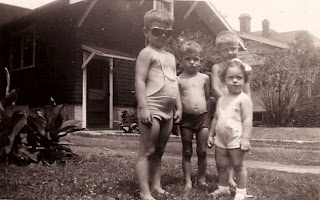 (l-r) Alan Kennedy, Bobby Denton, CE Welch, Ginger West.
CE Welch sent this picture from his family albums.
Check out the abs, and the shades on Alan.
The date is 1945 or 1946, perhaps the summer after kindergarten.
CE lived on Fayette, Ginger behind him on Williams Boulevard.
Bobby was Feitshans '59, Ginger SHS '59.
Sadly, she died in an auto crash in 1957.
Posted by Will Howarth at 11:22 AM No comments: 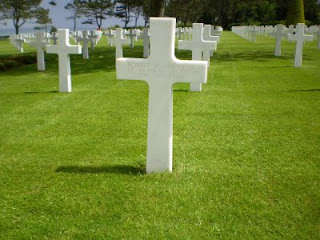 Centuries ago a family arose near Courcy, a village in Normandy, France. Later they emigrated to Ireland and then the USA, settling in the Midwest. By 1944, a young descendant named Robert Ahern, Jr. was flying a P-38 fighter-bomber out of High Wycomb, England, toward Alençon in Normandy.
The date was April 23, six weeks before D-Day, the Allied invasion of Europe. Robert was on a strafing mission, looking to knock out German defenses. He made a pass over Alençon to warn civilians of his intent; on a second pass, he was shot down and killed by anti-aircraft fire.
Today he rests in one of the military graves at the Normandy American Cemetery in Colleville-sur-Mer, France. The place is 54 miles from Courcy, where his family began.
Robert was my cousin, gone before I could know him. On May 19 I visited his grave for the first time. It's a peaceful spot, on a bluff above Omaha Beach, where so many died in 1944. All the graves face westward, toward the USA. 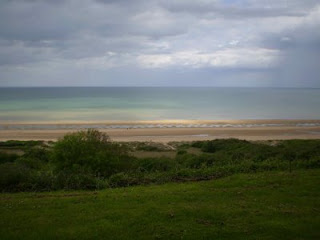 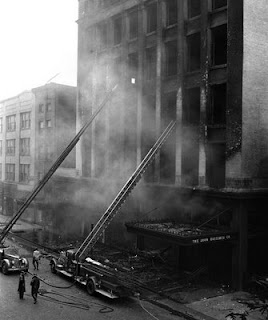 May 2, 1948
Some of you may recall the John Bressmer store downtown.
First escalators in Springfield. Departments on each floor.
Ladies wearing white gloves, shopping on Wednesdays.
Then lunch at Maldener's and a matinee at the Lincoln.
Sixty years ago this month, the store burned down.
I stood there with my Dad, watching this scene.
Later they rebuilt the store.
It remained on East Adams until 1980.
A full story, with more pictures, here.
Thanks to Judi Dunkel Headrick for the tip.
Posted by Will Howarth at 10:09 AM 4 comments: 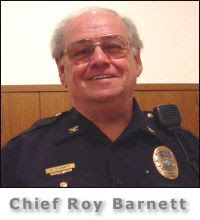 Roy Barnett '58 is retiring today as chief of the Chatham, Illinois, police department. After serving twenty years as a Springfield police officer, Roy took the Chatham post in February, 1988.
At the time he thought it would be a temporary job, but every succeeding mayor reappointed him. During his years in office the village doubled in population, from six to twelve thousand residents.
A widower, Roy looks forward to traveling and spending time with his four daughters, eight grandchildren, and four great-grandchildren.
A story about his retirement appears in today's SJR and a film at this link, but the film may not be there long.
Posted by Will Howarth at 12:18 AM 2 comments: