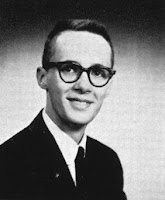 He attended Springfield High School, graduating with the Class of 1958. Later he attended Northwest Missouri State University for two years.

He worked for State Farm Insurance in data processing, was active in Elks lodge, and he enjoyed trout fishing plus hunting for deer and elk. In later years, he worked for Blue Cross and Blue Shield in Milwaukee, and he owned Mike's Drive-in Liquor in Branson, MO.

He is survived by son Michael of Lewisville, Texas, and granddaughter Jana; one daughter, Tracy Davis (husband Todd) of Troy, Il. and two grandsons, Logan and Jonas. No burial or memorial services have been announced.

Posted by Will Howarth at 4:09 PM No comments: