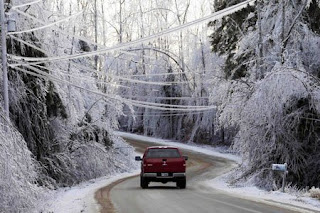 The most dreaded winter words are ice-storm. On Jan 27-28 a big one hit Richmond KY, and Allan Stephens sent us an account of his epic struggle with Ma Nature.

Electricity went off at 7:30 pm, and his basement sump began to overflow.
He lit candles around the sump, then began to bail with a pitcher into a bucket. Each bucket was two gallons, or 16.68 pounds. Then up a flight of five stairs to dump in the toilet.
A few trips would not be bad; he did this for nine hours until 5 AM, with help from wife Mary Lou and an additional, heavier 5-gallon bucket.
On day 2, the rain turned to snow and the sump level subsided. Al went out in search of a generator; no dice. Tried McDonald's for coffee; the line was three blocks long.
Finally at Wal-Mart he found a bilge pump and marine battery, hooked it up and began to empty the sump.
By now the inside temp was 40 so he lit a wood fire and raised the house to 50. While he enjoyed some hot soup, the power returned after a 25-hour outage.
Five days later, some of his neighbors STILL do not have power. Thanks to Al for his letter, and get some rest! 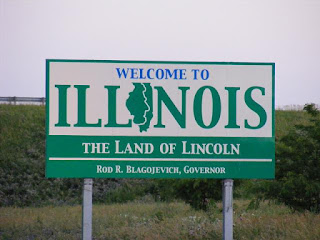 In this time of national economic crisis, Illinois and its current governor are providing a bit of comic relief. Mayor Daley of Chicago, normally no barrel of laughs, had this to say about the Governor's state of mind the other day.
Posted by Will Howarth at 10:59 AM 2 comments: 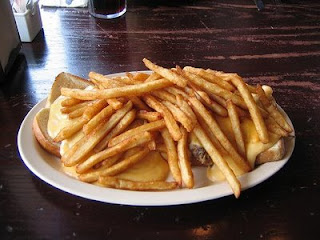 Springfield restaurants, ever ready to set trends, have fashioned three variations of an "Obama horseshoe sandwich" to mark the inauguration of the 44th president, and the fourth from Illinois (we include Grant and Reagan).
The State Journal-Register proposed a competition, and three chefs responded, at Maldener's, Sangamo Club, and D'Arcy's Pint. You won't find the usual combination of hamburger, fries, and cheese sauce; these concoctions emulate Chicago-style hot dogs and Hawaiian comfort food, in keeping with the new President's tastes.
The story appears today in the SJR. For background on the horseshoe, see this Wikipedia article, which proclaims that Springfield is indeed the birthplace of the artery-clogging sandwich. Do any of our readers still eat this stuff?
Posted by Will Howarth at 8:40 AM 6 comments: 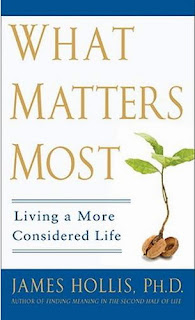 As promised two years ago, Jim Hollis has produced his 13th book. They keep rolling out, each one building a bigger audience for Jim's profound yet practical approach to human problems.

What Matters Most draws on Jim's background in literature and psychology to ask how can we find our way to what he calls a more considered life. He asks us to deal with fear, tolerate confusion, learn to grow, and always pursue life as a journey.
You may learn more at Jim's web site , which lists his lecture schedule, perhaps at a city near you. His latest book is available at Amazon or your local store.
Posted by Will Howarth at 11:15 AM No comments: