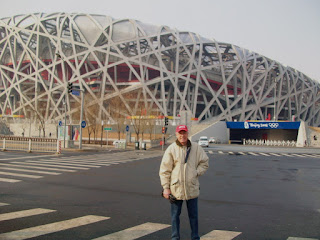 In retirement, our senior class president Bob Newell keeps busy with consulting jobs as a mechanical engineer. Last March he returned to China, where he has traveled often, to work with a company in Nantong, at the mouth of the Yangtze River.
He also visited Beijing, site of the 2008 Olympic Games, and here he is standing near the National Stadium, also called the Bird's Nest. Its shape follows principles of Chinese ceramic design.
Bob works through interpreters, and while many are skillful, he says it's hard to find one with advanced technical knowledge. He's now back in China for another month of work before returning to his home in Georgia. 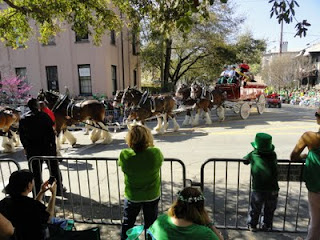 The near-annual reunion of the Hart-Sandlin clans transpired this year in Savannah, GA, where Dick and Ann Tobin Hart often meet with Bob and Leslie Heineke Sandlin. Savannah is a place to escape wintry Springfield and view a St. Patrick's Day parade, featuring a team of the world-famous Budweiser Clydesdales. The parade is the second largest in the USA, taking three hours to pass and viewed by a third of a million spectators.
Another exciting event will be April 15, when Robert Redford releases his historical thriller, The Conspirator, about the assassination of Abraham Lincoln. Filmed at Savannah locations, the movie makes extensive use of the Sandlin's former home, especially the scene where Lincoln lies on his deathbed in a "boarding house" while his Cabinet meets in a nearby parlor. This film was a big hit at the Sundance Festival; watch for it in your local theaters. 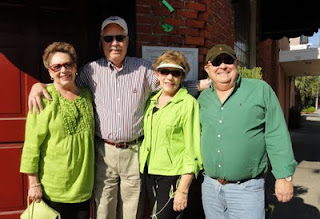 Leslie, Bob, Ann, Dick
Pictures by Dick Hart
Posted by Will Howarth at 11:42 AM 1 comment: