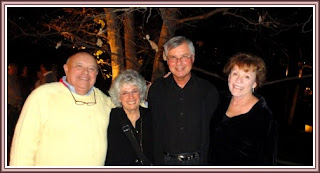 Dick and Ann Tobin Hart have returned to Springfield after a month on the road, visiting family and friends.  They spent Christmas with their daughter in Austin, TX, New Year's in Santa Fe, NM, and in Santa Monica, CA, visited their son and an old friend from Butler-SHS days, Arnold "Sonny" Myerstein.

Sonny's wife, Jeri, is a school friend of Louise Taper, whom the Harts know as a Lincoln collector. Louise put on a dinner at her Beverly Hills home, which produced the picture above: (l to r) Dick Hart, Jeri Myerstein, Sonny Myerstein, and Ann Hart on January 17, 2011. (Please note the severe winter conditions.)
Louise showed pieces of her collection, items about Abraham and Mary Lincoln and John Wilkes Booth. Ann and Sonny talked of the good old days at home. He is still close to his Springfield neighbors, Charlie Adams and Fred Hoffmann '59. Sonny and Jeri both plan a return to Springfield before long.
On the return trip, the Harts made their first visit to Las Vegas, NV, and then drove the Plains back to Prairie land. Their faithful pooch, Sammie, made the journey with them. As Dick reports, "…the trip was a long drive for old folks, but it was on our bucket list."
If you have news and pictures to share, please send them to Will Howarth.

Posted by Will Howarth at 11:24 AM No comments:

The following obituary, by Devin Carroll, appears on the Community Alliance web site, dated November 1, 2010.
With sorrow, we announce the peaceful passing of William James Tranquilli on September 3, 2010, after a lingering illness. A well-known activist for many causes, Will enjoyed living in Fresno for many years.
Will was born April 13, 1940, in Springfield, Illinois, to Joseph and Martha Tranquilli. Will learned his activism from his parents. Martha, whose activism began in her youth, was a shining example who taught her children the basics of social protest. Martha served as a peace witness for the Women’s International League for Peace and Freedom during the federal government’s occupation of Wounded Knee reservation and prior to that was incarcerated for nine and a half years in federal prison at Terminal Island as a tax protester.
Will graduated from Springfield High School and Southern Illinois University with a degree in communications. Will’s activism began in high school where, for the debate team, he took the position in favor of the legalization of prostitution. In college, Will worked with the Student Nonviolent Coordinating Committee in Cairo, Illinois, and later in Mississippi.
In his teens, Will suffered from a nasty bout of polio. He spent many months in an iron lung, which may have given him his sense of compassion. The doctors said he would never walk again, but his tenacity proved them wrong.
In the early 1970s, the family relocated to California, eventually settling in Dobbins in the Sierra Nevada foothills, where his brothers Joseph and Vincent still reside. Will later moved to Fresno.
Will worked for a myriad of causes, including tenant’s rights, gay rights, free speech and Americans for Democratic Action, just to name a few. He was a prominent member of Health Care for All in Fresno.
Will often attended the Fresno Friends Meeting and enjoyed meetings of the Humanists of the San Joaquin Valley.
Will’s razor sharp wit and contagious sense of humor will be sorely missed by all who knew him. His latest passions were the struggle for the rights of the disabled and world peace. Now Will has found his peace.
Posted by Will Howarth at 10:38 PM No comments: