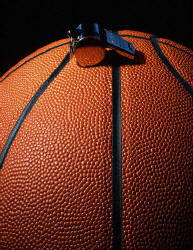 C. E. Welch sent me this obituary notice last night. Many '58s will remember Tom Cole from his years as a varsity basketball center, and for leading the SHS 1959 team to the Illinois state basketball championship.

Tom passed away Thursday, September 22, 2005 at the age of 64. He was born June 14, 1941 in St. Louis, MO the son of George and Lucille Cole. Throughout his life Tom was a very compassionate man who put others first. He was inducted into the State of Illinois Sports Hall of Fame for basketball. He graduated from U of M and was the captain of the basketball team from 1962-1963. He was a member of the Victors Club, and was very involved in youth sports. He retired as owner of Cole Associates, and was looking forward to enjoying his retirement.

Tom was an intelligent, honorable, and loving person and will always be with us. He is survived by his beloved wife of 38 years, Linda, dear children Christina Cole Slade (Mark), Tom Cole Jr., his precious grandchildren Madeline Dixon Slade and Andrew Cole Slade, sister Lucy (Don) Folger, and many nieces and nephews.

A Memorial Serv ice will be held on Saturday, September 24, 2005 at 4:00 PM at First United Methodist Church of Saline with Pastor James Tuttle officiating. The family will begin receiving visitors at the church at 3:30 PM. A private family burial service will take place. Those wishing may make memorial contributions to Bank of Ann Arbor-George Thomas Cole Memorial Fund (to be used for stroke awareness and research) attn: Patti Judson 125 S. Fifth Ann Arbor, MI 48104

Tired of trying to call a major corporation and landing in Voice Mail Hell? Timothy Noah has written a series of articles for Slate magazine on how to find a human operator at those places.

He has also published a link to IVR Cheat Sheet, which offers a handy chart of instructions for evading voice mail at banks and companies selling cell phones, credit, insurance, computers, Internet, retail, shipping, telephones, travel, television, and power.
Posted by Will Howarth at 10:10 AM 1 comment: 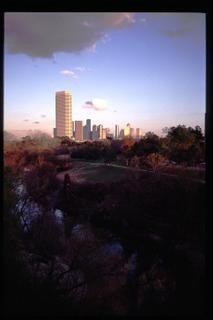 I've only been to Houston a few times, usually just pausing at the airport on my way somewhere else. It's a huge city, made rich by energy and aerospace, and it lies just 60 miles from the Gulf, where Hurricane Rita is fast approaching.

We have two '58 classmates in Houston, Jim Hollis and Helen Young. I am hoping they are safe tonight, either headed away from the storm or hunkered down somewhere with family and friends.

Most of the U.S. population lives in coastal areas, even though they are far more dangerous than inland locations. We are in a more active hurricane cycle now, and the damage is made worse by rising costs and larger populations.

In truth, we ought to have a national no-build zone of 25-30 miles, to preserve coastal wetlands and barrier islands, which absorb the killer storm surges. But folks with boats and beach houses don't want to hear that. (You don't agree? Let's hear comments!)
Posted by Will Howarth at 11:05 PM No comments: 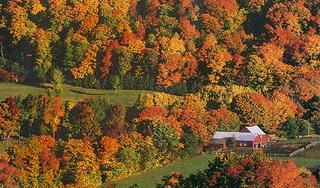 First we had tourism, then ecotourism, and now agritourism. Visits to Illinois and staying at family farms has become a new trend in the travel industry, according to an August 21 story in the Los Angeles Times.

The story cites three locations, in Nauvoo, Rantoul, and Belleville, but doubtless many others exist. Check out the Illinois Tourism site for suggested stays and getaways this fall.
Posted by Will Howarth at 2:48 PM No comments:

I will be away from Princeton Sep 12-17. During that time, I will have spotty e-mail access and won't be able to write any entries for the class blog.

If you have news or pictures, please continue to send them in. I'll resume as soon as possible after returning.

Thanks for your notes and cards.

I regret to report that Jerry Johnson died today at 1:30 am EDT. He had a number of post-op complications and was unable to rally.

This picture is from our 1957 junior yearbook. In 1958 Jerry graduated from New Mexico Military Institute in Roswell, NM. He considered SHS his school because of the many classmates he knew from his grade and high school years.

At his request, Jerry's ashes will be scattered on the North Carolina property that he so loved. If you wish to share memories of Jerry, either leave a comment here or write to Ivy Johnson at Jerry's address in the directory on our class pages.
Posted by Will Howarth at 11:40 AM No comments: 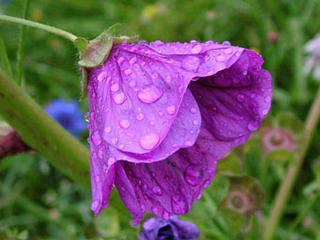 Three of our class members lost their mothers this week. The obituaries in the Journal-Register are as follows:

SPRINGFIELD - Juanita N. Welch, 92, of Springfield died Monday, Sept. 5, 2005, at Lewis Memorial Christian Village. She was born July 20, 1913, in Marion County, Mo., the daughter of Henry and Edith Moore Shroder. She married Clarence E. Welch in 1934; he died in 1963. Mrs. Welch retired from the secretary of state's office in 1978. She was a member of Order of the Eastern Star, King's Daughters and Central Baptist Church, where she served on the Diaconate, trustee and mission boards and was a member of Weber Sunday school class and Women's Service Council.

SPRINGFIELD - Miriam D. Nation, 90, of Springfield died Sunday, Sept. 4, 2005, at St. John's Hospital North. She was born June 15, 1915, in Normal, the daughter of Walter P. and Anna Vetter Dyson. She married George H. Nation in 1939; he died in 1998. A son, Michael G. Nation, and infant daughter, Mary Ann, also preceded her in death. Mrs. Nation retired as a secretary from the Kerasotes Theaters in 1980. She was a member of Laurel Avenue United Methodist Church, Irene Smith Circle of King's Daughters and St. John's Samaritans. She volunteered at the Sojourn Thrift Shop and as a guide at the Old State Capitol.

For the addresses of Judy McGaw Lewis and C. E. Welch, see the Directory on our class pages. Thanks to Judy Vicars Van Hagen and Ann Tobin Hart for relaying the sad news.
Posted by Will Howarth at 10:08 AM 3 comments:

The Library of Congress has a new exhibition, Language of the Land: Journeys into Literary America, and the website version features four regions, Northeast, South, Midwest, and West. 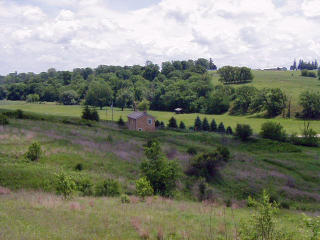 For those who still live in the Midwest, or miss it a little, or don't miss it at all, I urge you to take a look at the images and texts gathered to celebrate that chunk of our mid-continent. 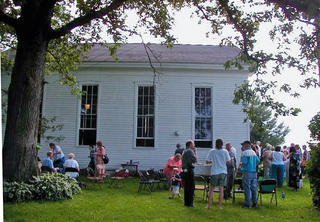 The pictures shown here are some I took on a June visit to southwest Wisconsin, the Uplands or Driftless Region. The country church was the site of a Welsh chapel sing, where the congregation sang in Welsh and in four-part harmony.
Posted by Will Howarth at 4:55 PM No comments:

Jerry Johnson suffered a massive heart attack on August 23. During a few days of pre-op medication, he had a second, smaller attack and went on a respirator. On September 1, he had triple bypass surgery. A day later he was sitting up, eating spoon food, and preparing for intensive therapy before he goes home.

Jerry attended Dubois School. At SHS he was active in Wranglers and played as trombonist for the Starduster dance band. (second row, far right). He married Ivy Levchenko in 1960 and spent his career with Greyhound, retiring as a district manager. Ivy worked for the PGA in Palm Beach Gardens, FL. They moved to the Asheville, NC area to enjoy mountain living. Their daughter, Cathy Nines, lives nearby in Weaverville and works for the Mountain Area Health Education Center, where Ivy also worked for eight years. 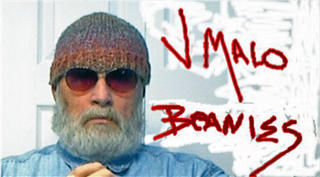 Jerry is a fan of the SHS pages and has sent me several pictures of souvenirs, including the Senators pin on our home page. For a hobby he makes cool knit caps and sells them on eBay. Here he is modeling one under his handle, J Malo, though he could easily pass for Ernest Hemingway.

You may send notes or cards to his e-mail or postal addresses, both listed on our Directory, or just leave a get-well comment here. Jerry is a great guy, full of fun and good humor. For all of us, I wish him a speedy recovery.
Posted by Will Howarth at 9:12 PM No comments:

Jo Meiers Leggett lives near Alamo Square in San Francisco with her dog and cat, Chance and Sally Tomato, both aging and lucky to have found her. Her son, Cameron, is a doctor at nearby Kaiser Permanente, and her daughter, Cate, is a certified massage therapist in Pittsburgh.

Jo learned photography in 1975 while living in Pittsburgh. She began to teach and win prizes, especially for her studies of animals, and her stunning portfolios have toured museums from Oregon to Usbekistan.

In 1989 she relocated to San Francisco and later became publisher of photo metro magazine, a premier showcase for art photography. She has sold her pictures to museums in Pittsburgh, San Diego, Austin, Brussels, and Paris. Her writing appears in two books, Our Mothers and Our Grandmothers, both available from Amazon.

Jo sent me several of her pictures, which I'll share with you in future entries. What you see here is only a sample of her extraordinary taste and talent. 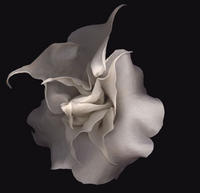 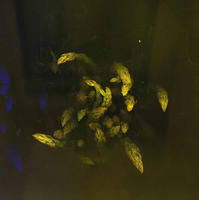 Posted by Will Howarth at 8:46 AM No comments: