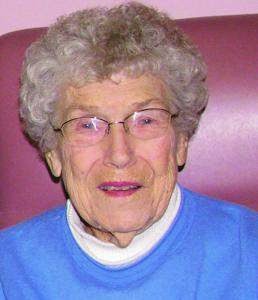 Early in her career she taught Home Economics in Chenoa, Mason City, and Pawnee, Ill. She then spent 30 years in Springfield at Lanphier and Springfield High Schools before retiring in 1983.

She was a member of First Church of Christ Scientist in Boston, Mass. She was also a member of Philanthropic Education Organization (P.E.O.), Chapter ES, in Springfield, an organization that promotes educational opportunities for women. Mary June did significant traveling in North America, having visited all 50 states and all 13 Canadian provinces and territories.

She was preceded in death by her parents. She is survived by her children, Byron Nesbitt of Springfield and Edith Nesbitt of Cypress, Texas; her brother, Harold Junior Griffith of Galesburg, Ill.; three grandchildren, Jennifer (husband, John) Styrsky, Sean Nesbitt, and Bill Nesbitt; and five great-grandchildren.

Per Mary June's request, no ceremonies will be held. Cremation will be accorded by Lincoln Land Cremation Society. A private family graveside service will be held at a later date in Galesburg, Ill.