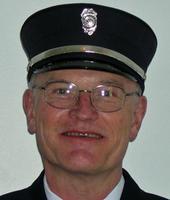 I take it back: some generous folks live in the East, and one of them is Alan Kennedy '58. Al has retired from a career in finance and last year he and his wife, Miriam Short ('59), moved to a new home in Farmington, CT.

Never an idle hand, Al joined the East Farmington volunteer fire department. The officers found him some gear, enrolled him in a Firefighter 1 class, and to date he has responded to over 400 emergency calls, the second highest record in the department.

This summer he completed EMT training through Hartford Hospital. He's now a first responder to fires, medical emergencies, and vehicle accidents. Early this summer, a high-voltage wire set a donut shop and several cars ablaze. The firemen had to wait 45 minutes for a power shut-down.

Here we see Al in a quieter moment, cleaning up after a pancake breakfast fund-raiser. 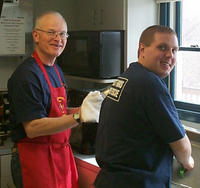 In our school days, Alan was a talented musician and leader of the StarDuster band, which played at so many dances. He's a grand example of just how active and community-spirited "retirement" can be these days.