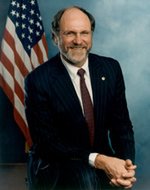 Few people know that Jon Corzine, U. S. Senator and newly-elected governor of New Jersey, is an Illinois native. He was born in Christian County, on a small farm close to Taylorville, about 27 miles southeast of Springfield.

As a kid he joined 4-H and was a St. Louis Cardinals fan. He went to the U. of Illinois at Champaign-Urbana, joined the basketball team as a walk-on, served as president of his fraternity, and majored in Commerce.

After earning an MBA at the U. of Chicago, he joined the investment firm of Goldman Sachs and worked his way to the top. He took the company public, winning a rep for being low-key, efficient, kind, calm, and casual--he wore sweater vests on the trading floor, while making billion-dollar deals. (That's Illinois for you.)

Some observers say he may be President one day. Right now he looks forward to moving into a governor's mansion, since his current home in NJ is an apartment in Hoboken.