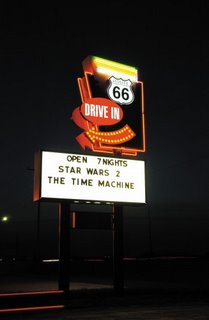 Drive-in theatres began in Camden, NJ in 1933 and spread across the USA, reaching a peak in the 1950s of over 4,000 screens. Springfield had two, on South Grand and South Sixth, and today one is operating as the Route 66 Drive-In.

This may not be the same one I remember; it opened in 1978 as the Green Meadows, closed in 1982, and then sat unused for several years. The Knight family bought it in 1990 but did not reopen until 2002.

Today it has two screens, a playground and refreshment stand, and a nearby amusement park, probably replete with batting cage and water slide.

Not many drive-ins survive today; so if you are ever back in town, check this one out for an evening of summer-time nostalgia. 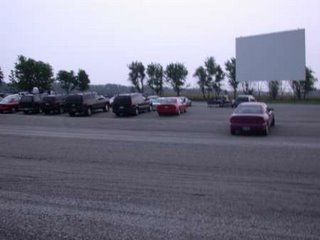 I recall that on Buck Night, certain pals of mine would pack the trunk with several non-paying customers.

It was also a lot more fun to go there with a date than with the family.

Oh yes, the Southern View gang certainly all remember the 66 Drive-in. (I'm sure Diane Gurgens can add to this) It was located just south of St Joseph & the now Motel 66. It was owned by the Kerasotas family who lived on the lake, Hazel Dell area. During the day I either did yard work at their residence or performed maintenance at the drive-in. In the evenings we were ushers (wore white coveralls and carried flashlights) but during intermission served food at the concession stand. Sometimes I also drove the kiddie train or operated the small Ferris wheel. That was my first job before several of us shipped out for Mendota where we became professional pea-pickers for Del Monte Packing Co. ....

Oh yeah Will, lots of good memories of the old Drvie Ins, including both the trunk loads of us freeloading guys and date nights when not much movies were watched ;-)

Ah, the "passion pit." Actually the last time I saw a movie at a drive-in was in Maine when Dave and I saw, believe it or not, "Gone With the Wind." That great old movie was really meant for a venue like the Orpheum Theater in Springfield where I first saw it. Wonder what ever happened to the theater organ from the Orpheum, and does anyone remember the guy a little older than us who played that organ after it was restored? I loved that theater, broke my heart to discover it had been torn down.

Others may correct me, but I believe that the Orpheum Theatre organ transferred to the SHS auditorium, where it resides today in all its ivory and gilt splendor!

I need to do a little research, but my recollection is that the Orpheum was a vaudeville theatre in the early 1900s; later a "movie palace" and one of the largest of its kind, certainly in central Illinois.

Some of the class ne'er do wells, me included, may recall the pool hall that resided beneath the Orpheum, where one could play billiards and snooker on winter afternoons.