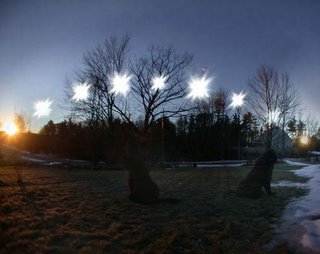 In case you missed it, winter solstice began on Dec 21 at 1:35 pm EST. This picture shows the sun at its southernmost position, giving the northern hemisphere its shortest day and longest night of the year.

Depending on your frame of mind, Dec 21-22 begins winter or brings more light. The word solstice is from the Latin sol, or "Sun," and stitium, or "stoppage." Many cultures have marked these days as the end of a calendar cycle and a time for major festivals.

In Greek legend, a grieving wife named Alcyone, or Halcyon, threw herself into the sea upon discovering the drowned body of her beloved husband, Ceyx. The pair changed into kingfishers or halcyons, and Zeus forbade the winds to blow seven days before and after the winter solstice, the birds' breeding season. Hence the expression "halcyon days," or tranquil waters.

Romans called this time of year Saturnalia, a time for feasts and gifts. Christians later adopted it as the time to celebrate the nativity of Christ.