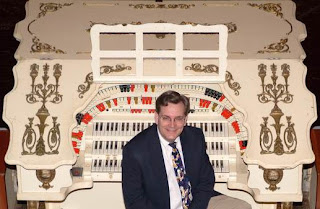 The Barton Theatre Organ in the SHS auditorium is a source of great musical fun to the community. I believe the organ once sat downtown in the Orpheum theatre. Early in the 1990s, it moved to SHS and was restored. (Locals, please comment if I'm wrong.)
Today it's used for school programs and public concerts, the latter often featuring Mark Gifford, an expert on church and silent film music. You may catch Mark on July 3-4 in Pittsfield and Springfield, and again on Dec 6 and 26 for carol concerts in Springfield.
Our Video channel has a brief film of Mark performing at SHS. For the memory-challenged, check out Music.

The Barton Theatre organ (yes, it was the organ that was at the Orpheum Theatre and used when silent movies were the big thing and the movie was accompanied by someone playing this very organ) is still in the process of being restored, little by little, and usually totally playable while different parts are being worked on or being sent away for restoration. Mark Gifford is one terrific organist and musician, as well as personable and very funny. He sings in one the groups I sing with, Springfield Choral Society. If anyone ever has the opportunity to hear him play the Barton Theatre organ at SHS auditorium, you will be totally and delightfully entertained.
Judy Van Hagen

The organ sat unused and forgotten at the Orpheum (although Al Kennedy's dad may have played it once upon a time) until classmate Bill Laforce discovered it, did some work on it, and tried to buy it from the theater. By that time, however, he had generated enough interest in it that the Orpheum got it mostly going again and kept it.
I remember my last time at the Orpheum, between features the house lights stayed down, an arc light spotlight hit orchestra center, and the music started: Tom Harmon rising up out of the floor playing it. Great memory!
--Allan Stephens

I too remember Tom Harmon playing that wonderful organ. What ever became of him?

I really loved the Orpheum Theater and was heartbroken when I went back to Springfield after years away and found it had been torn down.

Hi Barb,
I decided to do a little sleuthing and see if I could find Tom Harmon, and naturally, google came to the rescue. I attended on of his concerts at UCLA in the early 1970's, and got to speak with him briefly. He had studied in Vienna and had just become a professor of organ at UCLA in 1968, and he remained there until 2002. Try googling "Thomas Harmon professor of organ," and you'll find a nice article written about his music career.
Bill Ice
PS. We sat next to each other in the SHS Band saxaphone section---he was the only one who could play Flight of The Bumblebee without faking it (like I did).

A little more research shows that Thomas Harmon is today on the board of the Westfield Center in Medford, OR, an organization that promotes classical keyboard music.

Idea: nominate Tom for the SHS Hall of Fame, with the stipulation that he give a concert on the Barton Organ!

And you may hear a clip of his music at http://rogerbourland.com/blog/mp3s-piano-organ-music/ (need Flash Player installed)

Tom was the longest tenured organist in UCLA history. He assisted in restoring many organs at schools, churches, and even Disney World.

For a tiny picture of Tom, see
http://www.bachlund.org/images/Tom_Harmon.jpg

And here's a news story, with a bigger picture, in color:

Thanks Bill and Will. I had wondered for years about Tom H. We can certainly be proud of SHS grads, even those who weren't lucky enough to be in the class of '58 :)