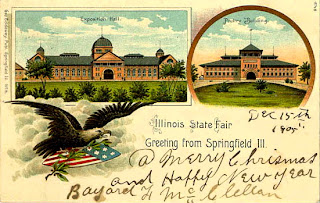 Several of the '58s are State Fair buffs, so they may like to know that an Illinois State Fair Museum Foundation has formed in Springfield.

Currently located under the fair grandstand, the foundation plans to raise $5 million for a permanent building on the fair grounds. A full story appears in the SJR today.

History: in the 1860s, Springfield had a choice between the new state university and the "annual agricultural exposition." It took the Fair, and Urbana got the school. Far-sighted?

Good for people to know.