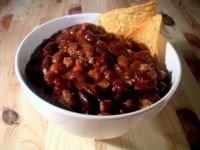 I try to keep controversy out of these pages, but word has reached me that Texas is disputing a resolution of the Illinois state legislature in 1993 that declared Springfield the "Chilli Capital of the Civilized World."

Please note the spelling: chilli versus chili. Chili is an old Texas border dish, originating in the 1840s. Chilli is from Springfield, dating back to creation of the Den Chilli Parlor in 1909. Was the name misspelled or did the Den want to pay tribute to ILLinois?

You may read the history of chilli, and of today's chilli parlors, in this issue of the Illinois Times. At one time, Springfield had more than a dozen parlors selling the spicy bean-and-meat stew. Remember Allen's Cigar Store, near the Post Office? Or the Sugar Bowl, at State and South Grand? The Dew and the Den, who could tell them apart?

The Den survives today as Joe Roger's on 9th Street, near the Lincoln home. They still offer a Firebrand chili, and if you eat one bowl, your name goes up on a wall list. Last time I was there, I saw the names of two nuns from Ursuline Academy. Way to go, Sisters!

You said it WILL....
Springfield WINS the Award and Title for Chilli Capitol of the WORLD.

We have the original recipe from Old Mae and Ollies Tavern where
relatives and movie stars often gathered for a cool one on tap and bowl of the prize winning stew.

Bob entered the annual chilli cook off here in S.J. and WON first place...one year not so long ago.

If I can talk him into it....I will email it to you. You simply have to try it... Plain with crackers... in a bowl as intended or Steak and Shake called it Chilli Mac ( spaghetti with a couple scoops of the sauce in the middle with a ring of heinz ketchup and a couple spoon of tiny red beans sprinkled on top followed by some chopped red onion topped off with grated cheddar and of course a healthy dash of parmesian.)

Hot & Yummy and it goes down (and sometimes through) mighty fast. Should I tell you that at our age it needs to prefaced by a shot of BEANO. LOL and a follow up slug of malox.
Our best to you,
Bob's Wife